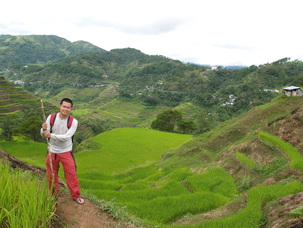 I completed my PhD in anthropology at the University of Hawai’i at Manoa in the Spring of 2010.  My doctoral research focused on the archaeology of highland agricultural systems in Southeast Asia, specifically on the Ifugao agricultural terraces (northern Philippines). My PhD research findings established the recent inception of the Ifugao rice terraces, arguing against the long history model proposed at the beginning of the 20th century by pioneer anthropologists. Rather, the rice terraces are seen as responses to the arrival of the Spanish in the northern Philippine highlands. This work has espoused the idea that the artificial contrasts  that we see between highland and lowland populations in the Philippines are products of colonialism and history, rather than differences in ecological adaptation.
In addition, my graduate work also looked at landscape archaeology, indigenous agro-forestry, and defining Ifugao social organization.  My dissertation research was funded by an NSF Dissertation Improvement Grant and Henry Luce Foundation/American Council of Learned Societies Dissertation Fellowship.

Currently, my research focuses on indigenous responses to European colonialism. The research investigates how indigenous populations responded to Spanish colonialism, particularly populations that did not have direct and/or intensive interaction with the colonizing power. The research program argues that the Ifugao of the Philippine Cordillera moved to the mountains as a means of political consolidation at c. AD 1600 to counter the threat of the Spanish expansion to the northern Philippines and as a response to the policy of reduccion and encomienda.

This research program contributes to anthropological studies on colonialism by looking at how political and economic intensification mitigated the impacts of colonialism on populations in Ifugao, Philippines, who were in the periphery of Spanish reach. The Ifugao are known for their rice terraces, which are UNESCO World Heritage monuments. Once thought to be over 2,000 years old, our recent work has demonstrated that the upland rice field systems in the region were responses to the social and political pressures from intrusive Spanish colonization into the region starting at c. AD 1600.

I contend that the Ifugao responded to the imminent infiltration of the Spanish colonizers and their lowland mercenaries by consolidating political control (particularly, control of rice-land holdings and access to trade goods) and intensifying their rice production. Our work provides evidence that indigenous populations in the fringes of the Spanish colonial reach had complex political systems that were meant to deal with community power relationships and other indigenous groups.